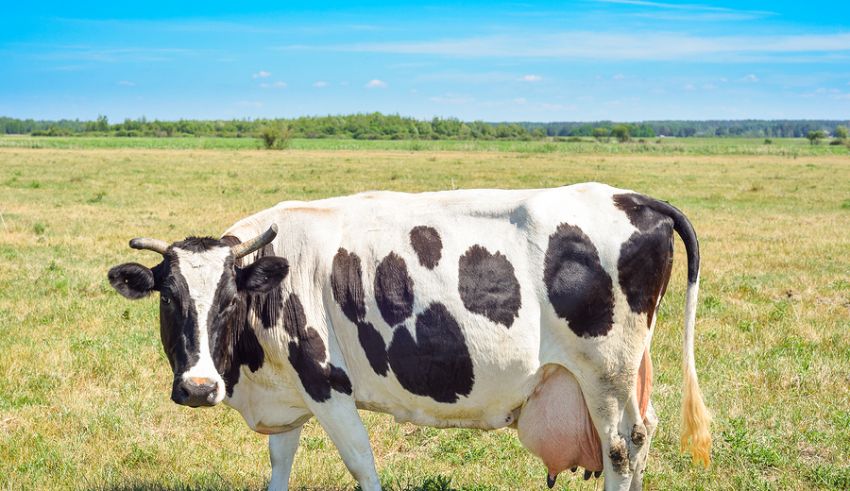 Close up portrait of cow with a large udder on the background of green field. Beautiful funny cow grazes on cow farm Big curious black and white cow staring at the camera in natural background

Defense wins games. Ask any coach impatiently striding the sidelines. “The defensive line-up must be ever vigilant and able to rapidly neutralize the attacking incursion, which may come from any direction. You cannot wait for help from the cover defense! Any defensive lapse will be ruthlessly exploited by this opposition and all will be lost,” shouts the coach at spent and cowed players as the bell signals the end of their halftime break. Coaches could learn a lot more about defense from biology. An exemplar defensive strategy par excellence is used by mammals, especially dairy cows, where the defensive system is the animal’s immune system, the best in the league, and the opposition threat is microbial infection.

Infection is the ultimate challenge to an animal’s survival. Typically, there are no armistices in these battles, just total victory, or total defeat for the individual animal. Over many past generations, the outcomes of these battles drove an evolutionary arms race between the immune system of an animal species and infectious microbes. Occasional changes (DNA mutations) in the latter that increased microbial infectivity were eventually countered by advances (DNA mutations) in the immune system of the animal, but all this takes a great deal of time. The arms race continues unabated. Luckily, the mammalian immune system of today, through the process of evolution and natural selection, is exquisitely adapted to defense against microbial challenges. Mammals have multiple defensive components in their immune system that work together like a well-drilled team to robustly protect an animal from the ever-present threat of microbial infection.

The Three Armies of the Mammalian Immune System

There are three major components of the mammalian immune system that defend the body from microbial incursion. The first component is the secretion of protective antibodies from immune cells that are sensitized to specific microbial invaders (humoral immunity). The second component enlists immune system cells that are trained to seek out and destroy specific microbial invaders (cell-mediated immunity). Both of these components are primed for defense by the memory of past battles with specific microbes i.e., the immune components must first be trained to recognize specific microbes before they can destroy them. These two components are exquisitely efficient at killing or neutralizing specific invading microbes that they recognize from past incursions, and hence they are called the adaptive immune system. However, the Achilles’ heel of this defensive strategy is its impotency when confronted by new microbial invaders that have never before been in contact with the animal’s immune system. It takes time for these two immune components to learn to mount a good defensive response, time that can be exploited by the microbial invasion. The third immune system component, innate immunity, plugs this defensive gap as it rapidly responds to new microbial threats. The innate immune defense component does not require memory of past microbial invasions, it is ever ready for defense, and importantly, the activity of the innate immune component is largely indiscriminate in its targeting of microbes; it annihilates anything that is broadly recognized as foreign within an animal. Innate immune defense is brief, brutal and unsophisticated, often causing some collateral cell damage while saving the day. This is an evolutionarily ancient and formidable front line of defense against microbial invasion in all animals.

In dairy cows and other mammals, there is extension of all three immune system defense components into milk, but in particular the innate immune component [1-5]. The innate immune component in milk guards against opportunistic infections caused by microbes such as bacteria, fungi, and viruses lurking in the local environment of a cow. The mantra of The Game of Thrones television series that “winter is coming” (the external threat is real and certain), is never truer. These microbes can be restrained by good dairy industry hygiene practices, but they are an ever-present potential health threat to cows. The innate immune component in cow’s milk protects the mother from mammary tissue infections (mastitis) and it may also protect the suckling calf while its adaptive immune system is developed and trained [6]. Protection of lactating cows from infections improves the efficiency of milk production and it is important from an animal ethics perspective.

A major challenge to the dairy industry is the maintenance of the health of cows during the periparturient period (around birth), a time when the physiological foundation for optimal lactation is established [7]. During this period the cow is vulnerable to infections such as mastitis and uterine diseases [4]. Scientists suggest that this increased susceptibility to infections is caused by profound physiological, metabolic and hormonal changes in the cow accompanying birth that together cause periparturient immunosuppression within the cow [7]. Pre-emptive good hygiene management of cows at this time is a mainstay of the dairy industry. However, there is also need for preclinical identification and early treatment of infections during this at-risk periparturient period. A team of investigators recently suggested the need for a simple test using milk that reports the broad-spectrum health of the cow, and enables early treatment of any infection before it becomes established and causes clinical symptoms, especially the loss of milk production [4]. These investigators and others suggest that a molecular test based on innate immune system proteins in milk may provide the answer [3,4].

Recently, German investigators identified a large number of innate immune biomarkers (proteins) in milk that can be used to monitor the general health of dairy cows [4]. The study was published in Advances in Dairy Research and highlights research from sixteen investigators, led by Joerg Lehmann, from several research institutions primarily based in Leipzig, particularly the Fraunhofer Institute for Cell Therapy and Immunology. The aim of the study was to identify and validate potential bovine biomarker candidates detectable in milk for the evaluation of the general health status of dairy cows.

The investigators used an interesting approach to the discovery of these biomarkers [4]. First, they identified large groups of healthy and diseased cows in early lactation from normally high-performing commercial populations of dairy cows. The diseases they identified were varied in terms of disease agents, affected tissues, and severity. Lehmann and colleagues identified about forty different diseases, some were systemic affecting nonmammary and sometimes multiple tissues, and others were due to intramammary mastitis. The investigators argued that using this population of cows, any disease biomarkers discovered in milk would identify a broad spectrum of common cow health issues and may be able to discern intramammary from systemic infections. The latter possibility was not a primary aim of the study. Second, they identified gene activities (the abundance of each messenger RNA (mRNA), the intermediary between a gene and its corresponding protein) in milk cells from cows with systemic extramammary disease or intramammary disease that were different in the milk cells obtained from the healthy cow group. The investigators reported that the process generated a long list of 1,891 genes with mRNA levels in milk cells that were affected by disease. Many of these genes coded for innate immune proteins. Third, the investigators substantially narrowed down the list to a smaller group of high priority genes by selection for only those genes ultimately generating proteins that are secreted out of cells and into milk, and which are known to be involved in inflammatory responses. The gene prioritization process worked well as the investigators reconfirmed single gene results from some previous studies [3]. Fourth, the investigators then measured the quantities of a number of specific proteins present in milk derived from these high priority genes to confirm their association with disease. In all, the investigators discovered a substantial number of candidate protein biomarkers in milk that report cow health. Some but not all of these proteins are involved in innate immunity. This is a valuable list that may have many future applications. Finally, the investigators demonstrated that a combination of the quantities of a few of these protein markers in milk was better able to detect the early signs of disease than the quantity of any individual protein—it’s about the team, not the individual player.

Joerg Lehmann and colleagues concluded that a combination of biomarker proteins in milk could be used as a broad-spectrum measure of cow health [4]. This test using milk could provide an early indication of preclinical infections in cows and allow earlier treatment to minimize adverse production impacts from common diseases. The investigators also stated that an automated, cost-effective and high-throughput method for accurate biomarker quantification still needs development. The coach may now have a decisive early warning system to head off attacking disease incursions.