Monday , 4 July 2022
Home Industry News Animal Health & Nutrition What is the Difference Between Square and Round Hay Bales? 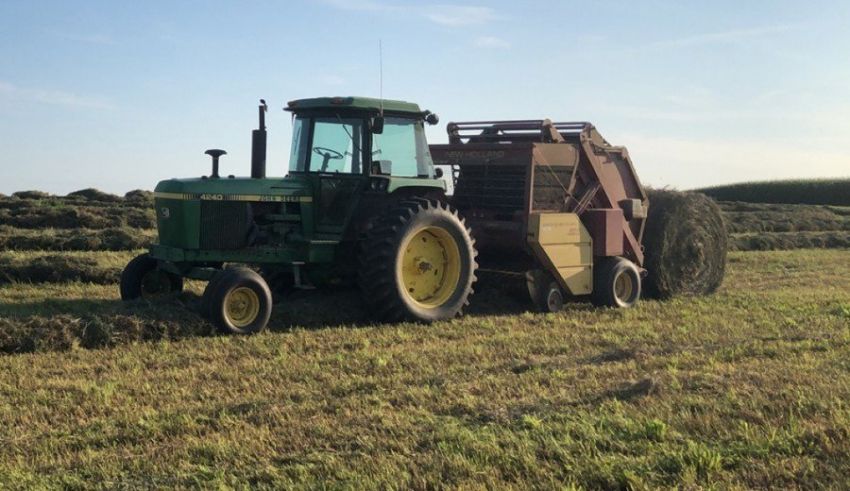 Farmers started using large, round baling equipment to reduce human labor in the 1970s. The hay is cut, left to dry, then raked into rows. The baler rolls the hay into the large, round bales. Credit: John Schutte

Ask most anyone what hay is, and they will tell you something like “dried grass that is fed to cows and horses during the winter.” Everyone has seen, either in real-life or on TV, cattle or horses being fed hay. It’s easy to confuse hay with straw – also used on farms. Hay is a highly valuable crop, one with good nutritive value for animals. Here’s a blog that might clear up that topic for you!

Hay production has seen dramatic changes over the last 50 years. The hay itself – alfalfa and grasses – has increased in nutritive value. And, there are  even changes in how it’s baled.

Back in the 1950s and 60s, most hay was put up in square bales. These rectangular-shaped bales usually weighed 50-60 pounds. They were shaped in a way that they could be stacked in a hayloft or barn until they were needed. Farmers cut hay in the field and let it dry for several days in the sun. Then they raked the dried hay into rows and ran baling equipment over the rows. This produced the bales. Storage is key to keeping this crop ready to be fed to animals in the winter.

Starting in the 1970’s new machinery caused a revolution in hay making. Large round balers became available so that now, much of the hay put up across the country is in large, round bales. The round bales can weigh 1000 pounds or more.

The only difference between square and round bales is the type of machinery used. The shape of the bale won’t influence the nutrient content of the hay.

Why have most of hay producers changed from making small square bales to large round bales? It is primarily due to the labor requirements for making the smaller bales. Those bales must be picked up from the field, moved on a trailer, then stacked in a barn for storage. Ask anyone who has had that job, and you will quickly realize it is hard, time-consuming work.

Round bales have the same amount of hay as about twenty square bales. They are designed to be moved using tractors. Instead of having to move twenty square bales out of the field, into the barn, then back out to the cattle during the winter, one large bale is moved with a tractor.

The technology to make large round bales has taken a job that might take three or four people and made it a one-person job. For a farmer who may use or sell several hundred round bales during the winter, that makes a big difference in time and money.

There are hay producers who continue to produce small square bales. Most of them do this primarily for the convenience of customers that buy their hay. If someone has a horse and needs hay, small square bales are a more acceptable size for use. But for people that feed large amounts of hay, round bales are the norm. Even though round balers may cost twice as much as a square baler, the labor savings during hay baling and feeding more than make up for the extra expense of the machine.

The next time you drive along a country road filled with large round bales of hay, remember that advances in technology haven’t just happened in computers, medicine and industry. Technology has also impacted agriculture.

Answered by Gary Bates, The University of Tennessee

About us: This blog is sponsored and written by members of the American Society of Agronomy and Crop Science Society of America. Our members are researchers and trained, certified, professionals in the areas of growing our world’s food supply while protecting our environment. We work at universities, government research facilities, and private businesses across the United States and the world.