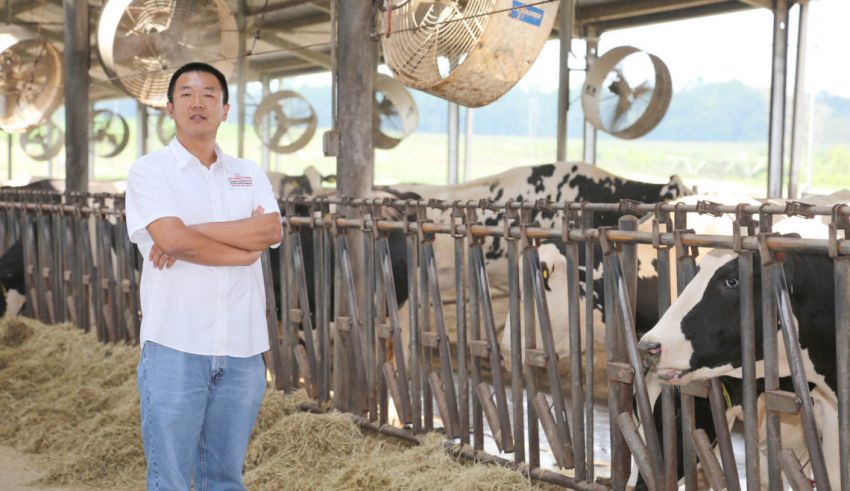 There are clear signs that growth in milk production in China is leveling off and, recently, even declining, say a team of Chinese and international researchers, including from World Agroforestry (ICRAF), in a study published in the journal, Climatic Change.Heat stress is one of the main reasons for the recent reduction. In their study, the team computed the change in milk production as a result of heat stress in production areas in China. They constructed a temperature–humidity index spatial layer to understand the monthly distribution of heat and moisture and documented specific areas in northern China where cattle were at high risk of heat stress in specific months. The index’s values exceeded the threshold above which milk production declines during the months of June, July and August. Especially during July, the index value was higher than the production threshold in recent years (2008 to 2016) and in projected future scenarios (2050 and 2070). Reductions in milk yields owing to heat stress increased from 0.7 to about 4 kg per cow per day in July 2016. These losses are projected to increase from 1.5 to 6.5 kg by 2050 and 2 to 7.2 kg by 2070, representing production losses ranging 15 and 50%. The results suggest that climate change will have significant consequences for the dairy sector in China and other milk-producing nations. The results are useful in identifying areas susceptible to heat stress where adaptive practices can be deployed in livestock management to prevent significant production decreases.Why does it matter?The dairy sector is important for economic and food security across many countries. Millions of farmers worldwide raise approximately 280 million dairy cows to produce milk. The major global economic expansion of milk production started five decades ago with increased consumption of cow’s milk and, correspondingly, milk products began being traded in greater number. Driven by changing lifestyles, global milk consumption is projected to increase by about 60% by 2050, with many new consumers being in China. Governments promote milk consumption in food-based dietary guidelines and school milk programs because of the efficiency and effectiveness of milk in preventing malnutrition. Currently, China is the world’s leading milk importer, bringing in 12 million tons of raw milk in 2013, a quantity 123 times larger than that in 1961 and equal to 25% of domestic consumption in 2013. To meet rapidly increasing demand for dairy products, the growth of the dairy industry is accelerating. Milk production continues to increase in response to growing domestic demand, which largely originates from urban areas. What to Do?It is important to understand where heat stress could have the biggest impacts in order to try to mitigate the consequential decline in milk production. Regulations for promoting the revitalization of the dairy industry could consider relocating existing farms and better plan where new major dairy farm establishment should operate. Factors to include in such planning are 1) low temperature–humidity index values; 2) feed availability, especially high-quality local forage, like alfalfa and corn silage; 3) water availability; 4) land availability to produce high-quality forage as well as recycle manure (integrated crop–livestock approach); and 5) farming scale. An ‘ideal farm’ is one that can use local resources without environmental and economic burden. About World Agroforestry (ICRAF)World Agroforestry (ICRAF) is a centre of scientific and development excellence that harnesses the benefits of trees, including food trees, for people and the environment. Knowledge produced by ICRAF enables governments, development agencies and farmers to utilize the power of trees to make farming and livelihoods more environmentally, socially and economically sustainable at multiple scales. ICRAF is one of the 15 members of the CGIAR, a global research partnership for a food-secure future. We thank all donors who support research in development through their contributions to the CGIAR Fund.