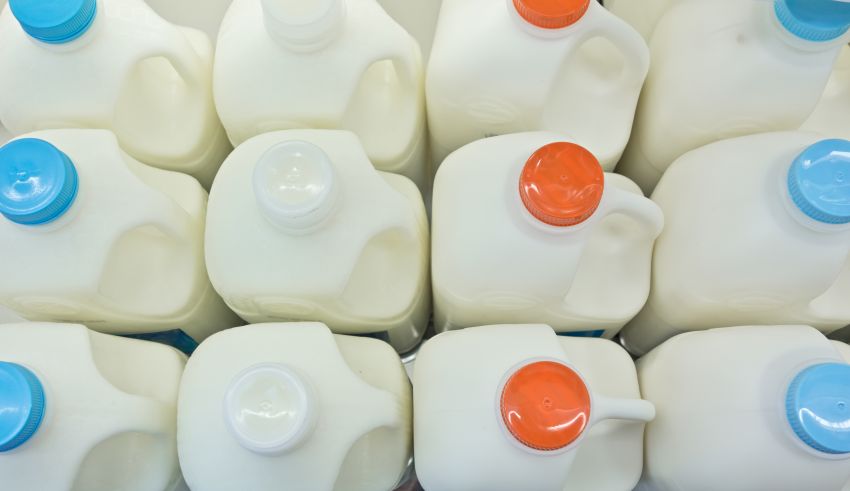 Overview
The coronavirus pandemic has attacked the U.S. dairy economy in waves. It showed up first via collapsing futures-based price outlooks in March, then prompted an April meltdown in the cash markets, and is now being felt most acutely in the milk checks producers will receive through July. But as of mid-May, cash and futures markets were strongly rebounding, particularly futures for the year’s second half, providing a significantly improved outlook for the nation’s severely-stressed dairy farmers.
Official U.S. dairy statistics are just starting to register the impacts of the pandemic, provisionally in product consumption data, stock levels and federal milk marketing order prices. It’s still too soon to see if the national dairy cow inventory numbers show any indication that market disruptions and the use of cooperative base plans to improve the supply-demand balance will alter the robust expansion of the national milking cow herd that the industry had entered into just before it was buzzsawed by coronavirus.  Read the following report published by the collaborative efforts of Dairy Management Inc. (DMI) and the National Milk Producers Foundation (NMPF).

Commercial Use of Dairy Products

U.S. domestic commercial use of yogurt showed positive year-over-year growth in the first quarter of 2020, bucking its trend of generally declining sales over the past several years. Growth was particularly strong in March, when food consumption began to shift from food service to retail sales, so it is possible that yogurt, with relatively low foodservice consumption, may continue to grow during the pandemic. U.S. consumption of cheeses other than American types was also positive during the first quarter, but not sufficient to grow total domestic cheese use during the period. Domestic use of butter and American-type cheese declined for the first quarter as a whole but rose in March, as did U.S. consumption of all cheese. USDA’s commercial use calculations for nonfat dry milk and skim milk powder are now including production and stocks of dry skim milk for animal use, with the product category now referred to as dry skim milk. Commercial use of all milk in the domestic market was down over the same period last year by all measures except milkfat basis.

U.S. dairy exports showed much the same pattern during the first quarter as during the prior rolling 3-month period: lower volume than a year earlier for milkfat and cheese but positive volume growth for the major dairy ingredient products and for total milk solids in all exports. Exports were higher in March than in January for most product categories, the result being that major effects of the current pandemic, such as the predicted falloff of exports to Mexico and renewed tensions between the United States and China, have yet to show up in official trade data reported to date.

Milk protein concentrate was the major category of U.S. dairy imports that showed significant year-over-year increases during the first quarter, but on a daily average basis, MPC imports declined slightly during the three months of the period.

The current U.S. dairy cow herd expansion cycle was off to a strong start in the first quarter: In its third month, March, year-over-year total dairy cow numbers were up by 47,000. The average increase in the third month of the previous seven herd expansion cycles, stretching back more than 20 years, was 31,000 cows, and the maximum was 46,000. For the entire first quarter the increase was 26,000 cows. U.S. total milk production was 2.2 percent higher than a year ago in March and up 1.8% for the first quarter as a whole. However, the current dire milk price and income situation and the implementation by many cooperatives of base-excess plans is likely to alter the trajectory of this expansion significantly. Milk solids production increased at a slightly slower year-over-year rate than milk production itself. This was the first time this was the case for a consecutive three-month period in more than five years. 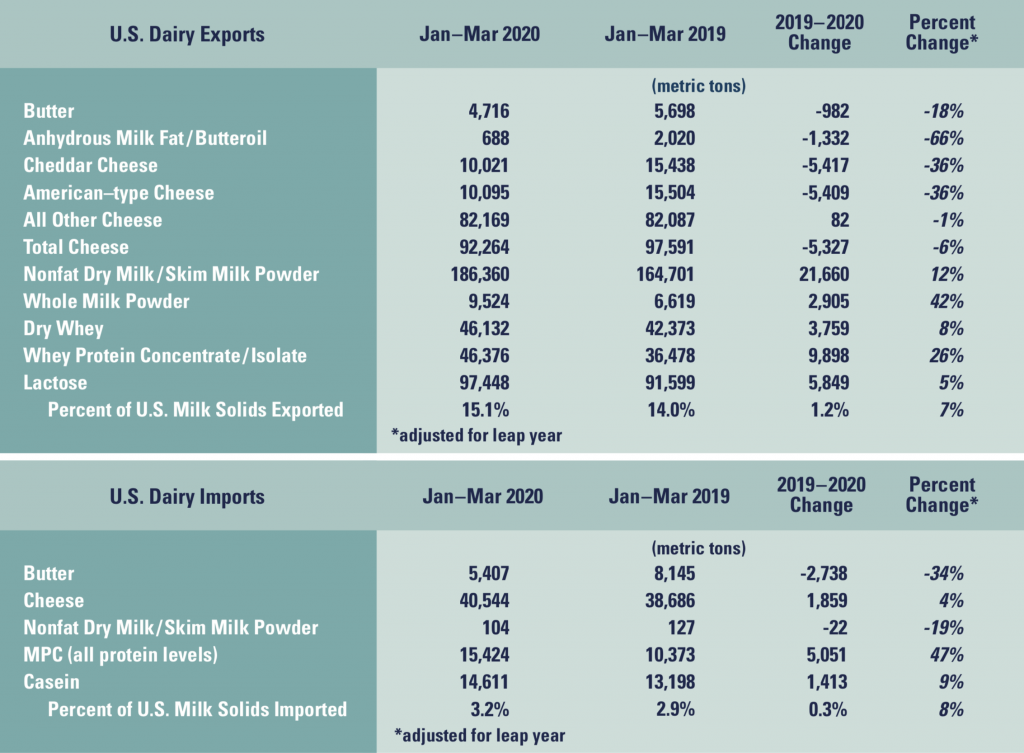 Production of all the major categories of cheese declined during the first quarter except for American types other than cheddar, which increased by 2.3 percent over a year earlier. By contrast, butter and nonfat dry milk production rose from a year earlier, while total whey complex production was relatively static.

End-of-month butter inventories rose moderately from the previous month earlier, as is typical for highly seasonal butter stocks during the first quarter. However, the high level was more typical of second-quarter stocks levels, which are usually the year’s highest. Nonfat dry milk stocks were also high by historic standards at the end of March. March-ending inventories of American-type cheese were up from their levels during the second half of 2019, when cheddar cheese prices were strong and contributing to the recovery of milk prices. 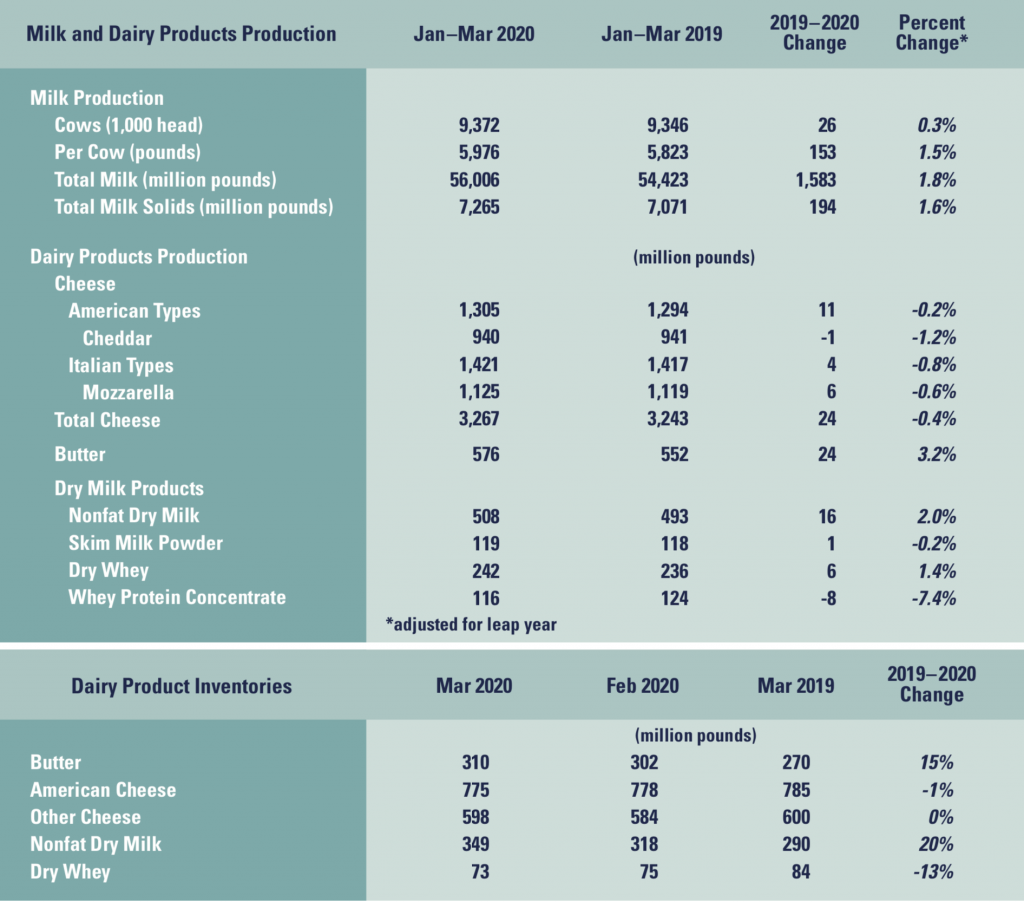 Wholesale dairy product prices reported by USDA’s Agricultural Marketing Service in the National Dairy Product Sales Report (NDPSR) for April show definite signs of the impact of the then-developing coronavirus pandemic. Prices were down significantly from both a month earlier as well as a year ago for butter and cheese. Nonfat dry milk prices were back down to where they were a year earlier.

These changes were reflected in changes in Class III and Class IV prices. Although there is a lag between wholesale and retail pricing, April retail prices reported by the Bureau of Labor Statistics (BLS) showed divergent behavior between the two. For example, the cost of milk components needed to produce a pound of cheddar cheese and the wholesale price of cheddar both dropped by about 20 percent from March to April, while the retail price of cheddar cheese rose slightly. Similarly, the cost of components needed to produce butter, as well as its wholesale price were both down by about 30 percent over the month, while the retail butter price was down just 3 percent.

The cost of components needed to produce dairy products is calculated at the appropriate federal order class prices and represents the amounts paid into federal milk marketing order pools, which determine milk prices paid to producers. 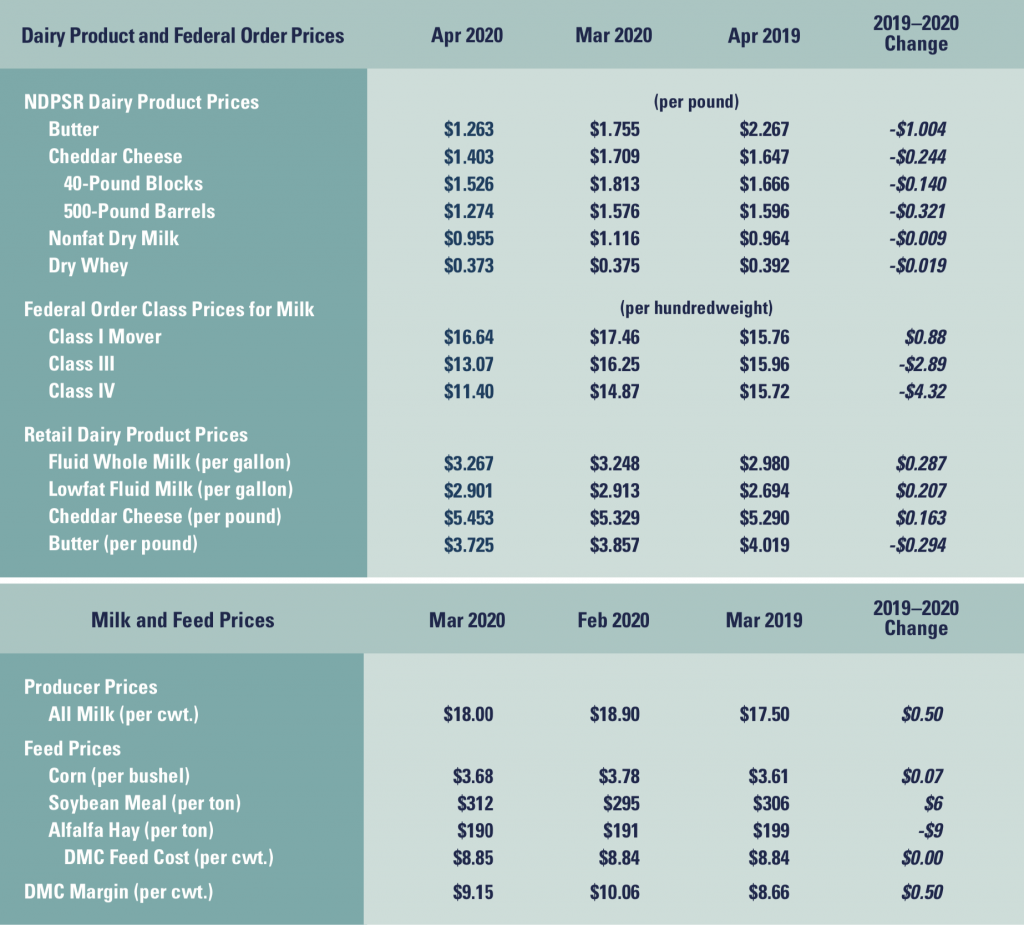 The U.S. average all-milk price dropped 90 cents from February to March, the fourth consecutive monthly drop since its 5-year monthly high of $21 per cwt. reached last November. This decline mostly predated the coronavirus impacts and was due more to common price declines following the end-of-year holidays and into the spring flush, exacerbated by the dairy herd buildup. Since the DMC calculated feed cost for March was almost unchanged from both a month and a year earlier, the monthly and annual changes in the DMC margin for March were essentially the same as for the milk price itself.

The dairy futures markets hit their lowest point, in terms of their implications for the calendar year 2020 average milk price, toward the end of April, with an estimate of about $15.70 per cwt. The futures-based 2020 price estimates have improved steadily since then, and the rate of that improvement accelerated in mid-May. USDA’s monthly update of its CY 2020 all-milk price outlook in the World Agricultural Supply and Demand Estimates (WASDE) report released on May 12 was $14.55 per cwt. This was again more than $2 a hundredweight below the futures- based milk price estimates at that time, as it had been a month earlier.

As with its April forecast, the May WASDE estimate may be attempting to account for lower returns for dumped and distressed milk. On a monthly basis, milk prices will drop sharply for April and again for May before starting to recover. Recent strength in dairy futures prices occur mostly for this year’s second half. But it is clear that the outlook for severely-stressed dairy farmers after the next few critical months is brightening substantially.