Thanks to dairy checkoff support, Taco Bell recently unveiled the Grilled Cheese Burrito, its cheesiest new offering of the year, and a Pineapple Whip Freeze beverage that contains real dairy.

Mike Ciresi, a Dairy Management Inc. (DMI) senior dairy scientist who works at Taco Bell’s headquarters in Irvine, Calif., co-managed both projects. He said the Grilled Cheese Burrito, which was unveiled on July 2, resulted from a brainstorming session at the company’s office. The goal was to put Taco Bell’s signature spin on a comfort food and grilled cheese fit the bill nicely.

The burrito features a blend of mozzarella, cheddar and pepper jack cheeses in addition to sour cream, beef, rice, crunchy red strips and chipotle sauce. A layer of cheese is then grilled around the tortilla to offer a truly unique experience for Taco Bell fans and cheese lovers, Ciresi said.

Taco Bell faced initial challenges in finding heat-resistant paper that the cheese wouldn’t stick to, but Ciresi led efforts to identify a solution that allowed the chain to successfully launch the product.

“Grilled cheese is a classic that everyone knows and loves,” Ciresi said. “What makes it so special is not only does it have classic Taco Bell fillings on the inside, it features a flavorful layer of indulgence on the outside that gives you a delicious, gooey, grilled cheese experience.”

The Pineapple Whip, released May 21, is the chain’s first beverage to contain dairy since Taco Bell and DMI formed a partnership in 2012. Ciresi said the beverage also faced several hurdles that needed to be addressed, beginning with Taco Bell restaurants not having refrigeration capacity near their drink stations to store dairy products.

So, Ciresi and Emil Nashed, who leads DMI’s Global Innovation Partnerships science team, joined DMI’s Product Research Team and the Midwest Dairy Center at the University of Minnesota to collaborate on a solution. Midwest is part of the National Dairy Foods Research Center program that receives national and local checkoff support. Its six centers encompass the expertise and resources of 17 universities.

The team worked to create a dairy-based, shelf-stable creamer that consists of real cream and met Taco Bell’s product requirements.

“Taco Bell has always wanted an indulgent beverage to fill a menu gap, but the setup of its restaurants made it challenging,” Ciresi said. “That caused us to think differently because we knew we could make a delicious dairy beverage that didn’t need refrigeration. We were convinced there was a way to do it and our work with the Midwest Dairy Center proved that it was possible.”

Ciresi also credits Taco Bell for having patience along the way.

“It took three years and lot of companies might have said, ‘OK, we’re done. Let’s move on,’” he said. “Taco Bell also could have gone with a non-dairy creamer, but they had a lot of passion for real dairy that brought us across the finish line.” 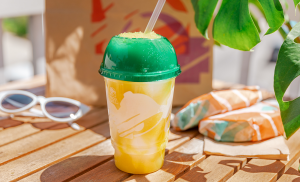 The Pineapple Whip Freeze has exceeded the chain’s expectations. It is available for a limited time or until supplies run out. The Grilled Cheese Burrito also is a limited time offering, which fits Taco Bell’s strategy.

“Taco Bell is known for its limited-time offerings,” he said. “They keep the menu fresh and exciting for an audience that’s always expecting something new.”

“Having scientists on site every day is valuable because we hear the conversations; we understand not just the product development direction, but the brand overall,” Ciresi said. “We can leverage our resources and dairy knowledge to help solve problems because we know firsthand where the limitations and hurdles exist. Bringing solutions to the table and identifying new opportunities is really what benefits the dairy industry.”

For more information about the dairy checkoff, visit www.usdairy.com.