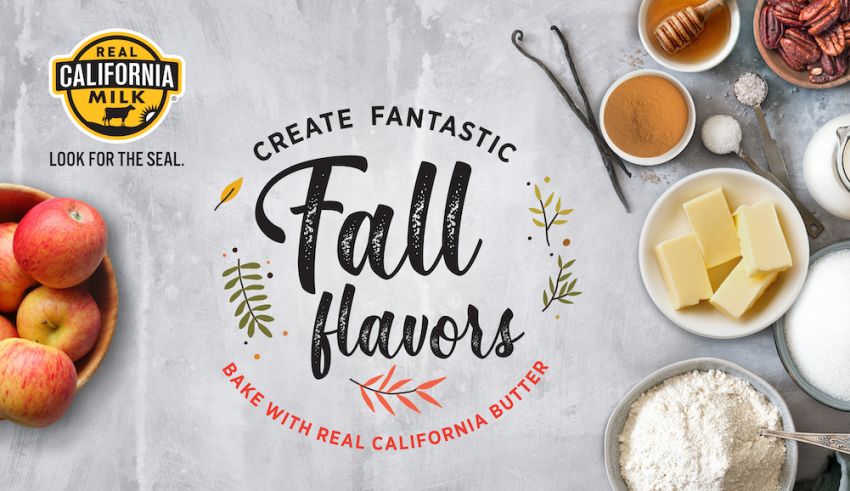 The California Milk Advisory Board (CMAB) announced today the launch of an October consumer promotion focused on Real California Butter as the foundation of the fall baking season. Featuring recipes such as Apple Brown Butter Crumble with Caramel Sauce and Poached Pears in Puff Pastry with Honey Whipped Cream, the month-long promotion will focus on creating delectable treats with classic fall flavors including pumpkin, cinnamon, apple, caramel, maple, and more all while highlighting California butter as a star baking ingredient.

The promotion will be supported with in-store media that will be displayed at 475 California stores including Raley’s, Mollie Stone’s Markets, Lucky Supermarkets, FoodMaxx, and Save Mart. Integrated digital media will include geotargeted email communication, recipe and related site banner ads, sponsored social media posts, and food influencer partnerships.

“Butter is a crucial ingredient in pies, crumbles, breads, and so many of the baked goods we enjoy during the cooler months,” said Katelyn Harmon, Director of Business Development, U.S. Retail for the CMAB. “We are encouraging families to use high quality, sustainably produced Real California Butter in their favorite baking recipes.”

The California Milk Advisory Board (CMAB), an instrumentality of the California Department of Food and Agriculture, is funded by the state’s dairy farm families who lead the nation in sustainable dairy farming practices. With a vision to nourish the world with the wholesome goodness of Real California Milk, the CMAB’s programs focus on increasing demand for California’s sustainable dairy products in the state, across the U.S. and around the world through advertising, public relations, research, and retail and foodservice promotional programs. For more information and to connect with the CMAB, visit RealCaliforniaMilk.com, Facebook, YouTube, Twitter, Instagram and Pinterest.