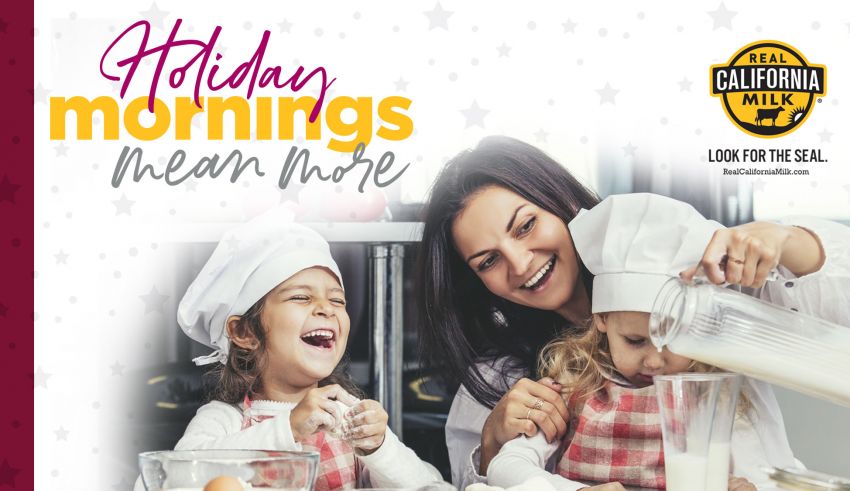 The California Milk Advisory Board (CMAB) announced today the launch of a consumer promotion focused on holiday breakfast traditions with dairy. The campaign is an extension of the Mornings Mean More campaign that first debuted in2020 . The Holiday Mornings Mean More campaign communicates messages of family, togetherness and the importance of  celebrating time together over special breakfast recipes. The featured promotional menu includes recipes designed to be enjoyed together such as Buttermilk Pancake Breakfast Tacos, Cheesy Hashbrown Egg Bites, Lemon Blueberry Pancake Casserole, and Ricotta Churro Waffles.

“Dairy is an essential part of breakfast. These holiday breakfast recipes were curated to showcase the best of California dairy while inspiring families to spend time together during the holidays creating new traditions in the kitchen,” said Katelyn Harmon, Director of Business Development, U.S. Retail for the CMAB. “High quality, sustainably produced Real California dairy products are perfect additions to make breakfast as a family that much more special.”

California is the nation’s leading milk producer, and also produces more butter, ice cream and nonfat dry milk than any other state. California is the second-largest producer of cheese and yogurt. California milk and dairy foods can be identified by the Real California Milk seal, which certifies they are made with milk from the state’s dairy farm families.

The California Milk Advisory Board (CMAB), an instrumentality of the California Department of Food and Agriculture, is funded by the state’s dairy farm families who lead the nation in sustainable dairy farming practices. With a vision to nourish the world with the wholesome goodness of Real California Milk, the CMAB’s programs focus on increasing demand for California’s sustainable dairy products in the state, across the U.S. and around the world through advertising, public relations, research, and retail and foodservice promotional programs. For more information and to connect with the CMAB, visit RealCaliforniaMilk.com, Facebook, YouTube, Twitter, Instagramand Pinterest.