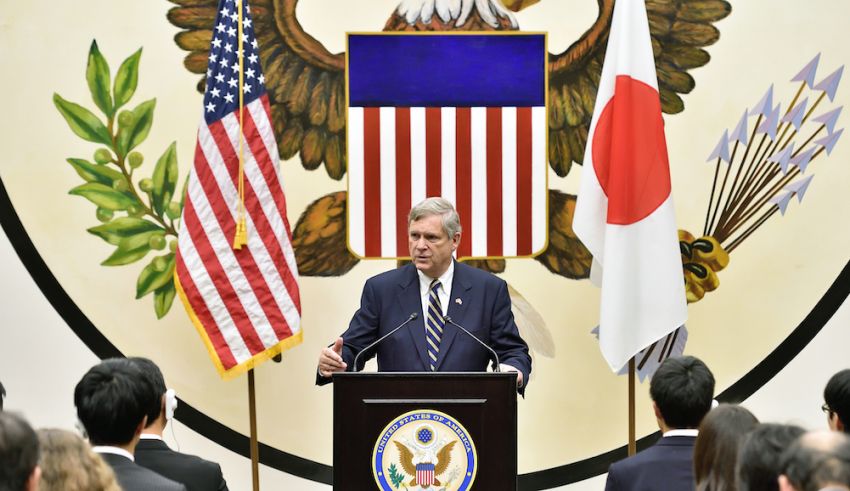 According to the U.S. Dairy Export Council, “Vilsack worked hard to strengthen the American agricultural economy, build vibrant rural communities and create new markets for the tremendous innovation of rural America. In eight years at the Department, Vilsack fought to put Americans back to work and create an economy built to last. Under his leadership, USDA supported America’s farmers, ranchers and growers who are driving the rural economy forward, provided food assistance to millions of Americans, carried out record conservation efforts, made record investments in our rural communities and helped provide a safe, sufficient and nutritious food supply for the American people.”

“Vilsack was the longest-serving member of President Obama’s original Cabinet. Prior to his appointment, he served two terms as the Governor of Iowa, in the Iowa State Senate and as the mayor of Mt. Pleasant, Iowa. Vilsack received his bachelor’s degree from Hamilton College and his law degree from Albany Law School in New York.”

“Vilsack has been honored for his public service and work to advance American agriculture by the Congressional Hunger Center, Global Child Nutrition Foundation, U.S. Global Leadership Coalition, National Corn Growers Association, American Farm Bureau, and National Farmers Union. A native of Pittsburgh, Pennsylvania, Vilsack was born into an orphanage and adopted in 1951. After graduating from law school, Vilsack moved to Mt. Pleasant Iowa, his wife Christie’s hometown, where he practiced law. The Vilsacks have two adult sons and two daughters-in-law-Doug, married to Janet; and Jess, married to Kate. They also have four grandchildren.”

Regarding Vilsack’s nomination, American Farm Bureau President Zippy Duvall shared, “The American Farm Bureau Federation welcomes the news that Tom Vilsack will be nominated to be Secretary of Agriculture. His leadership as the 30th Secretary of Agriculture and as Governor of a state reliant on agriculture is evidence of his qualification to serve in this role. Tom Vilsack understands that the agriculture sector is far more complex than most people understand. He believes in a ‘big tent’ philosophy that supports all types of production and understands the importance of respecting farmers and ranchers as partners worthy of support in the race to achieve sustainability goals.”

“Tom and I built a good relationship during his first term as Ag Secretary and we’ve built on that relationship in his current role with the U.S. Dairy Export Council. I look forward to sitting down with him again to continue our conversation on how to address the opportunities and challenges facing agriculture and rural communities. The pandemic revealed both the strengths and weaknesses of our food system, which Tom has had a front row seat to witness.”

“Together, we must prepare to tackle a new farm bill and build on efforts to create a fair marketplace for U.S. agriculture to compete globally. It is essential we ensure climate policies respect farmers and remain market-based and voluntary. And, we must end the digital divide that puts rural America at a disadvantage.”

“Tom Vilsack earned a reputation for rising above partisanship to serve farmers and ranchers and I’m confident he’ll continue to do so. The American Farm Bureau stands ready to support Tom and work closely with him knowing his success as Ag Secretary correlates directly with America’s farmers and ranchers, as well as our rural communities, having the support they need to flourish.”

National Milk Producers Federation President and CEO Jim Mulhern added, “Tom Vilsack has dedicated his life to service. While we will miss him as a colleague and friend, all of us in the dairy community who have had the opportunity to work with him over the past four years know his deep passion and commitment to rural America and his understanding of its interdependence with our urban and suburban communities. The challenges that lie ahead are many – from a battered farm economy to climate change, the environment and sustainability, to nutrition and the importance of addressing the nation’s growing food insecurity, as well as the need for better trade policy and expanded markets abroad, and much more. No one is better suited to tackle these challenges than Tom Vilsack. We applaud President-elect Biden’s decision, and we look forward to Secretary Vilsack’s next chapter of leadership in American agriculture.”

Michael Dykes, president and CEO of the International Dairy Foods Association shared, “The International Dairy Foods Association is pleased to see news of Mr. Vilsack’s expected nomination to lead USDA by President-Elect Biden. As Mr. Vilsack knows well, one-fifth of the nation’s economy is linked, either directly or indirectly, to the food and agriculture sectors, supporting more than 45 million jobs and trillions in wages. An experienced mayor, governor and two-term Agriculture Secretary in a previous administration, Mr. Vilsack has the knowledge and understanding to hit the ground running and make immediate progress on pressing issues facing food, agriculture and the rural economy. He has seen first-hand the pandemic’s impact on health and jobs, and we’re hopeful that with his guidance, we can continue to protect our essential workforce so they can feed our nation. To that point, the nation’s food security will be his top priority upon taking office, and IDFA offers our partnership in finding creative ways to reduce hunger and improve access to nutritious foods including dairy. On behalf of the men and women working across the dairy industry—from farms to processing facilities to retail and distribution hubs—IDFA looks forward to working with Mr. Vilsack and his team to make dairy central to solutions. Together, we can enhance economic progress for food producing communities and strengthen export opportunities, unleash innovation to safeguard our food and advance nutrition solutions, and create a more sustainable footprint for our food and agriculture sector.”

John Piotti, President and CEO of the American Farmland Trust shared, “American Farmland Trust congratulates Tom Vilsack on being nominated as Secretary of Agriculture by President-elect Joe Biden. At a time when farmers are struggling in the face of a global pandemic, his experience will help USDA tackle these challenges on day one of the new administration. We especially look forward to working with him to advance farmland protection, provide farmers the tools to address climate change, create a more inclusive agricultural system, and widen the doors of participation to a new, diverse generation of producers.”

Julie Anna Potts, president and CEO of the North American Meat Institute also sustained the nomination, and said, “Secretary Vilsack brings experience and leadership to the Department of Agriculture at a critical time when the meat and poultry industry works to put food on American’s tables and to keep the farm economy working in a pandemic. We look forward to working closely with Secretary Vilsack in his new role to ensure our industry remains a valuable partner to livestock producers, an efficient supplier to consumers and competitive in the international marketplace.”