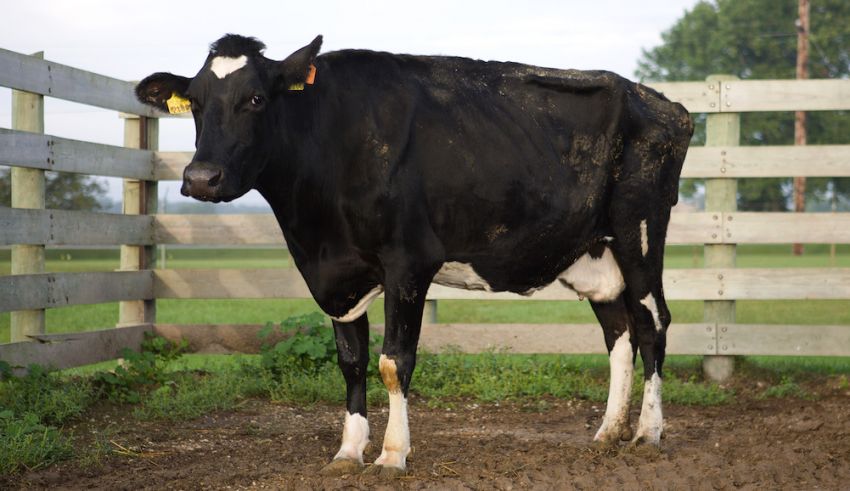 A cow naturally infected with M. avium subspecies paratuberculosis that is in the late stages of disease.

Johne’s disease, also known as paratuberculosis, is a chronic intestinal disorder that can cause diarrhea, weight loss, poor health and sometimes death in afflicted cattle. In the United States, Johne’s disease is most prevalent in dairy herds, costing the industry more than $220 million annually in losses. The disease also affects other ruminant animals, including sheep, goats and deer.

Rather than use the cells of live but weakened or dead MAP, as has been done with past commercial vaccine formulations, ARS microbiologists Judy Stabel and John Bannantine set their sights on four proteins from the bacterium, which they discovered from prior research to sequence and characterize its genome (or, genetic makeup).

In preliminary trials, vaccinating mice with the proteins reduced bacterial colonization of the rodents’ intestinal walls and bacterial shedding in feces, a major route by which other hosts become infected. Cattle, for example, can become infected while grazing pasture where MAP-contaminated manure is located. Calves ingesting colostrum from an infected dam is another route of infection, noted Stabel, who along with Bannantine, is with the ARS National Animal Disease Center’s Infectious Bacterial Diseases Research Unit in Ames, Iowa.

Encouraged by the results with mice, the researchers scaled-up their efforts, using standard laboratory procedures to produce the four proteins and combine them into a single, recombinant vaccine “cocktail” that could be administered to calves at doses of 200 or 400 micrograms.

Throughout, the researchers strived to avoid shortcomings of past vaccine formulations that had been developed, including a tendency to trigger blemishes at the site of injection and interference with the accuracy of serological tests used to detect not only MAP, but also another closely related bacterial species that causes bovine tuberculosis.

Trials with dairy calves, detailed in the April 2021 issue of the journal Vaccine, indicate the vaccine cocktail did not disappoint. In addition to rendering the young animals immune to the disease over the course of a year of monitoring, the formulation showed little to no cross-reactivity with serological tests for both Johne’s disease and bovine tuberculosis. Administering the vaccine cocktail also did not trigger blemishes at the injection site, Stabel reported—a potential benefit for animals raised for their meat and hides.

The researchers note the need for additional efficacy trials and welcome collaboration with an industry partner to explore the patented vaccine cocktail’s commercial potential further.