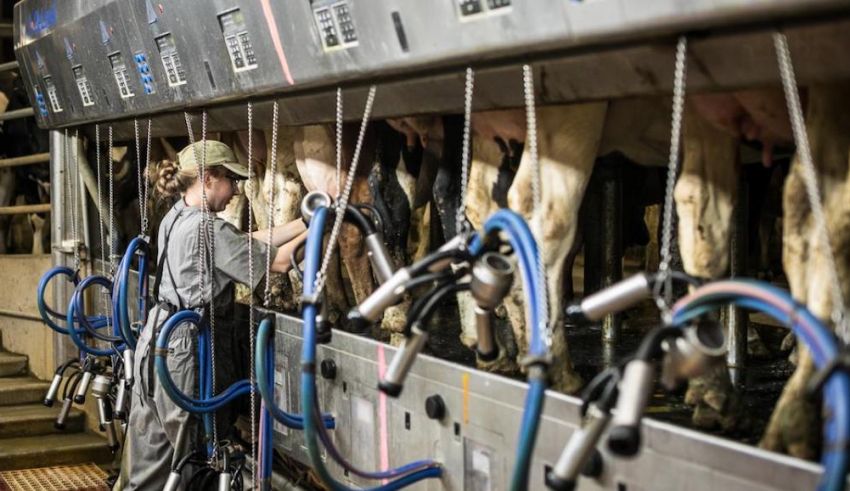 A student working in the Teaching Dairy (Photo by Chris Kitchen)

A four-year, $1 million National Science Foundation (NSF) grant will fund a project to test a novel strategy to make milk production more efficient and sustainable, while a second, related NSF grant of $200,000 will help students and faculty from Cornell and SUNY Cortland to communicate animal science to the public.

For the project’s research component, principal investigator Joseph McFadden ‘03, associate professor of dairy cattle biology in the College of Agriculture and Life Sciences, and colleagues will use $1,021,000 to test whether lipids called ceramides could help improve the efficiency and sustainability of milk production. When cows and sheep use nutrients and produce milk efficiently, they emit less methane, a powerful greenhouse gas.

“Animal foods are nutrient dense foods,” McFadden said. “They’re very important for human health and nutrition.” At the same time, over the last century, researchers have used their understanding of genetics, nutrition and animal management to dramatically reduce the amount of methane that an animal produces per unit of milk, McFadden said.

“It’s important that we let the consumer know that these advancements have existed and they’ve actually helped the dairy industry become more sustainable,” he said. “There’s a perception out there that the dairy industry isn’t doing anything and they’re purposely harming the environment.”

“If that’s the case, [the sheep or cow] should be more insulin resistant and make more milk,” McFadden said.

The project’s outreach component, led by Amanda Davis, [Ph.D. ’20], a former member of McFadden’s lab who is now an assistant professor of biological science at SUNY Cortland, is funded by the National Science Foundation Research Experiences for Undergraduates (REU) program, which supports research activities by undergraduates in NSF-funded areas.

More than 60 students and faculty from Cornell and SUNY Cortland will take part in science communication training led by staff and youth program coordinators at the Sciencenter, a hands-on museum in Ithaca. Ultimately, Cornell students and SUNY Cortland NSF REU researchers will apply what they learned about sustainable food animal production to inform the public on these issues. The students will also hold a public outreach event at local summer festivals and the state fair.

McFadden will also teach a course, Communicating Animal Science, which includes using social media and producing episodes for the podcast, Ruminate on This, to inform the public on issues concerning ruminants, such as cows and sheep. When McFadden taught the course last fall, students investigated consumer decisions about plant-based milk alternatives, surveyed members of the public at Trader Joe’s and Wegman’s on their choices, and then interviewed scientists to identify and address misconceptions. The results of their research and interviews will end up on the podcast in the near future. — By Krishna Ramanujan, Cornell College of Agriculture & Life Sciences