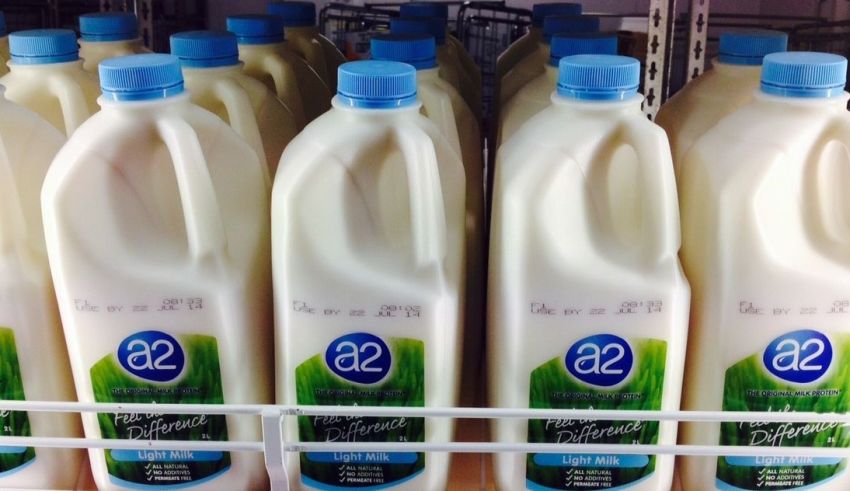 It used to be that the only decision you needed to make at the dairy case was full-fat or low-fat milk. Today, consumers are faced with dozens of alternatives to conventional cow milk, including milks free of lactose and “milks” made from soy beans, nuts, rice, and even peas (more about that in future articles). One of the newest alternatives to hit the shelves is A2 milk. It is marketed as an easier-to-digest version of conventional cow milk, differing by only one amino acid in one protein chain. But does the change in one protein really change the way A2 milk is digested?

Milks of all mammals contain a mixture of two major classes of proteins, whey, and casein. Approximately 80% of the protein in cow milk is present as casein, of which there are four subtypes: αs1-, αs2-, κ-, and β- caseins. A1 and A2 refer to two of several gene variants on β-casein proteins, which comprise about 30% of all casein proteins. Thus, when you drink cow milk, just over a quarter of the protein you are consuming is β-casein.

BCM-7 and other milk peptide fragments released during casein protein digestion are biologically active; each peptide interacts with specific tissues, resulting in specific physiological responses. Both in vitro and in vivo animal studies suggest BCM-7 interacts with, and thus influences, specific peptide receptors found in the nervous system, the endocrine system, and the immune system. Additionally, casomorphins like BCM-7 are known to influence gastrointestinal (GI) transit times, potentially by interfering with smooth muscle contractions in the small and large intestines in rodents.

The Devil is in the Details

There is a link between A1 milk, BCM-7 production, and digestion in animals, but it is not known yet whether these relationships are meaningful in humans. Those that argue that A2 milk is easier for humans to digest need to demonstrate not only that BCM-7 from A1 β-casein influences gut transit time and smooth muscle contractions, but also that these actions result in measurable negative GI issues in humans.

It is important to point out that investigations comparing digestion of A2 milk with regular milk do not assume that A1 proteins cause digestive issues in everyone. Just like some people have an intolerance to gluten protein whereas others can eat an entire baguette with impunity, BCM-7 is hypothesized to influence smooth muscle contractions in the GI tract in only somepeople (although it is not clear yet why some people may be more sensitive to the actions of BCM-7 than others). Indeed, many argue that people who diagnose themselves as lactose intolerant may actually be reacting to the A1 protein as opposed to milk sugar. As a result, most clinical studies comparing digestion in A1 and A2 milk have recruited participants with self-reported lactose intolerance; if A1 issues are present, this is the most likely group of individuals in which to identify them.

To date, there have only been four human studies that follow the gold standard for experimental design (i.e., randomized, double-blinded clinical trials). This type of study minimizes bias on the part of the study participant (they do not know what intervention they are receiving and thus cannot adjust their responses accordingly, they are randomly placed in a study group) and on the part of the researcher (they don’t know who is in each group and thus can’t let their hypothesis influence how they interpret the data). However, despite this highly regarded study design, each of these studies on A1 vs. A2 milk still has an inherent level of bias disclosed in their publications—the research was funded by the A2 Milk Company. Ideally, independent researchers without any financial interests in the outcome of the study would address this hypothesis.

Each of the studies followed a similar crossover design, wherein participants are asked to refrain from eating dairy for a period of time before the study begins to establish baseline values, and then randomly assigned to consume either only A1 or only A2 milk. Then, after another washout period, they consume the other milk type, and results from both intervention periods are compared. Each study differed in the amount of milk and the duration of each intervention, as well as which outcome measures (e.g., stool consistency, stool frequency, abdominal pain) were assessed, which makes direct comparisons difficult. For example, researchers had participants consume 750 ml of each type of milk every day for two weeks, whereas in another study, each subject 300 ml of each milk at just one time point, and then collected follow up data at 1, 3, and 12 hours after consumption.

Despite these differences, these studies converge on similar conclusions: consumption of A1 milk was associated with a longer gut transit time and softer stools compared with A2 milk consumption and baseline values [2, 3, 9, 10]. This is somewhat suspicious because usually longer gut transit time is associated with harder stool. Regardless, it is important to point out that these conclusions do not necessarily support the hypothesis regarding A2 milk’s easier digestion. Not to get too personal, but slightly softer stool and/or a slightly longer gut transit time need not be indicative of digestive issues. Indeed, in the first study, although the participant-assigned scores on the Bristol Stool Scale (that’s right, there is an index for assessing stool consistency!) were higher for A1 compared with A2 milk, mean values for A1 were actually closer to the normal range (which, if you are dying to know, is a score of 4).

The best data for testing the hypothesis regarding ease of digestion are actually subjective data, wherein participants report precisely how they feel after consuming each type of milk. After all, this is what will drive consumer decisions. The largest (and therefore most statistically powerful) study to address this to date comes from the second study. Each of the 600 Han Chinese participants was asked to report the severity of their symptoms at baseline and at set time points after each milk type consumption based on a 9 point scale, where 0 = not at all and 9 = very serious. Using these scores, the study authors created categories to evaluate the differences between A1 and A2 milk for each of the six evaluated symptoms (which included gas, bloating, abdominal pain, and stool frequency). The study reports that there was a greater trend toward slight improvements (a reduction in score of 1–≤3) in GI symptoms when participants consumed A2 compared with A1 milk. But the way in which the researchers composed their categories to evaluate differences between treatment interventions was extremely problematic. Namely, all of the categories capture only an improvement of symptoms with A2 (a reduction in score from A1 to A2). The category for worsening of symptoms from A1 to A2 (or an increase in score) is actually included within the category of no change in score. Without access to the raw data, readers are left to wonder how much of the 65% of study participants who experienced no difference in abdominal pain or the nearly 70% of participants who experienced no difference in stool frequency may have actually had worsening of symptoms with A2 milk. One would assume that this number is not zero, as the study authors would have been able to omit “worsening of symptoms” from the no difference category altogether. But is the number statistically significant? In order to take their conclusion of slight improvements in symptoms as valid, the research must be more transparent than its current state.

Is A2 Right for You?

The science of A2 milk is still in its infancy. Any scientific claim with only a handful of studies behind it (particularly those with a conflict of interest in the study outcome or questions regarding the data) should always be couched in the language of “emerging evidence” rather than “conclusive findings”. It is possible that some people who have stopped drinking regular milk due to digestive discomfort may be able to tolerate A2 milk, but the evidence is inconclusive. If you already drink regular milk without issues, there is no reason to switch.