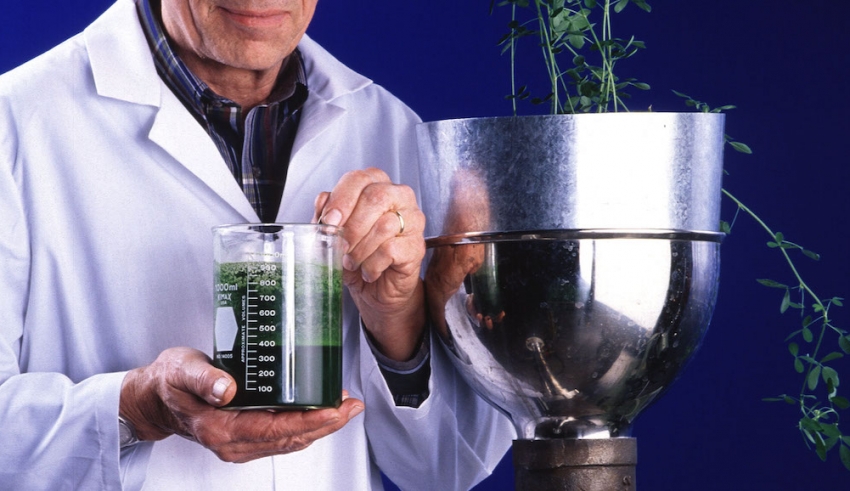 Cows and horses aren’t the only fans of alfalfa. Yellow perch like it, too.

That’s what Agricultural Research Service (ARS) scientists and their collaborators concluded when they fed the fish pellets made with a protein concentrate from the legume crop’s protein-rich leaves.

They’re experimenting with alfalfa as part of a broader effort to find suitable alternatives to using fishmeal, a protein-rich ingredient in aquaculture feeds given to “farm-raised” finfish and shellfish. Aquaculture is the fastest-growing sector of the food industry worldwide, generating $1.37 billion in U.S. sales alone. However, there’s concern that increasing consumer demand for aquaculture products will outpace what the ocean’s wild-caught stock of sardine, anchovy, menhaden and other small forage fish can supply as a fishmeal resource for aquafeeds.

According to Deborah Samac, who leads the ARS Plant Science Research Unit in St. Paul, Minnesota, formulating aquafeeds with plant-based proteins could help lessen the need for fishmeal in aquafeeds, reducing aquaculture’s impact on aquatic natural resources. Using nutritious, affordable alternatives to fishmeal could also ease the burden on pelagic fish populations, which are important members of the marine ecosystem and its inhabitants, particularly larger predatory species.

Soybean meal, barley and algae are among alternatives being explored or already commercialized. Now, many of the same qualities that make alfalfa “Queen of the Forages” (and third largest U.S. field crop) could put it on the aquafeed shortlist as well. These include a crude protein content of 15 to 22 percent and a rich assortment of vitamins, including A, B and D, as well as minerals such as magnesium and copper.

Alfalfa is typically fed to dairy cows, beef cattle and horses as hay, silage or a direct forage. But it can also be “juiced” for its protein concentrate, and that’s the form Samac and her University of Minnesota (UM) collaborators used for their yellow perch feeding trials.

The actual formulation process can involve passing alfalfa leaves through a screw press, squeezing out juices and then heating and centrifuging them to produce a protein concentrate, which is then dried and processed into small pellets along with other ingredients.

The feeding trial results showed that perch given pellets containing the alfalfa protein concentrate (APC) gained somewhat less weight than perch given fishmeal formulations. But there was little difference between their health, longevity and overall wellbeing. Their fillet yields, quality, composition and flavor were also similar, the researchers reported in a paper submitted to the journal Aquaculture Reports.

According to Samac, alfalfa could help impart greater sustainability to the $133.5 billion global aquafeed market by virtue of the ecosystem “services” and other benefits the crop provides.

For example, as a legume, it is a super star at naturally converting atmospheric nitrogen into a form that corn and other crops can use for their growth, alleviating the need to apply chemical fertilizers. Alfalfa’s robust growth makes it an ideal cover crop, anchoring soil, retaining its moisture, helping it store carbon and controlling weeds. Alfalfa flowers are also important food for both wild and domesticated bees, contributing to the latter’s production of honey, wax and other products.

Samac said additional studies are underway to fine-tune the APC concentrations used in aquafeed formulations, evaluate different processing methods, and expand feeding trials, which include rainbow trout. Value-added uses for byproducts of the APC juicing process will also be explored, she added.